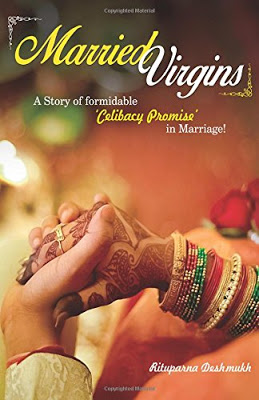 Summary
“Married Virgins” goes very much by the title itself. The story is a love triangle between Akira, Usain and Raghav. Where Usain falls head over heels in love with Akira, she too reciprocates the same feeling for him. But what role does Raghav play in their lives? How does Akira end up marrying Raghav? And what is the sacred promise that the two decide to hold on to?

Catch hold of this book to explore what lies within and decipher secrets in Akira’s and Raghav’s life.

My opinion
Confucius has rightly questioned, “Can there be a love which does not make demands on its objects?” ‘Married Virgins’ is based on a love triangle where the heroine loves a side hero and the hero loves the heroine. The only catch here is that the heroine gets married to our hero. But how- That has to be found out. The cover of the book is perfect. The blurb is apt. The best feature of the book is the division and presentation of content in the form of short chapters that are easy to read and time friendly. The titles of the chapters are not given specific headlines and that is actually a plus point.

The font (style and size) are fine. Happiness lies in smaller things- and this book proves this correct. Another positive aspect of this book is the use of clear and simple language that can be understood by a not-so-avid reader too. Acting like a cherry on the cake is the lucid narration and great execution of the plot. The pace of the story is superb. Every scene has been written properly without skipping the relevant details.

However, the book has a very big limitation and that is the editing and proofreading. From what could be judged after reading, the author himself probably did not give any importance to the use of rich vocabulary. For an instance, “separated us” has been written as “made us separate”, “she was mistaken” has been written as “she was mistaking” and there are numerous other errors. Secondly, the first part of the book is more like “Jab We Met” where Kareena’s extrovert nature is similar to Akira’s nature and Shahid’s introvert nature matches completely with that of Raghav’s. The storyline is also same. Akira blabbers about her love in front of Raghav and he decides to unite Akira with her love. The only twist was in the second part when Akira marries Raghav.

Overall, ‘Married Virgins’ is like an old wine served in a new bottle.

PS: I liked the execution of the plot but the errors and incorrect use of grammar are the main reasons for lower rating of the book.

Drawbacks
This book definitely deserves an overall high rating but there exists a major turn off in the book and that is the editing and proofreading part. With such gripping plot, even if the reader thinks of skipping the mistakes, it is impossible because the frequency is too high. Right from poor vocabulary to wrong tense usage, everything has been overlooked/ ignored. The book lacks editing. Even the basics of punctuation have not been paid heed to.