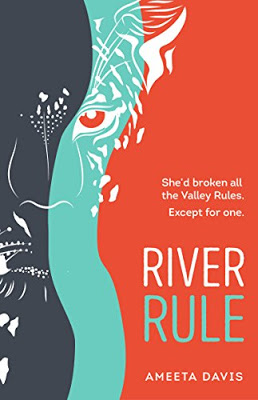 “She is free in her wildness, she is a wanderess, a drop of free water. She knows nothing of borders and cares nothing for rules or customs. ‘Time’ for her isn’t something to fight against. Her life flows clean, with passion, like fresh water.”
― Roman Payne

‘River Rule’ is a complete pot-boiler! This novella focuses on the life of Una and her diabolical present. Set in the urban village of Uttrakhand (Khamosh Valley), the story explores the relationship shared between Una and her friend, Avi. Their bond is has a scaffolding of trust and mutual gratitude; they can count on each other and stand with each other through the thick and thin. Their never-ending quest to live safely and peacefully amidst the forest is something that inspires and also helps us recount the importance of friendship.

The story begins on a grim note as the protagonist meets with an accident only to realize that it is all a figment of her screwball imagination. But Una is not crazy, for she knows that something is not right. From the moment she enters the valley, bizarre things start happening. Moreover, when her father abandons her on the strange land, she struggles to cope with the situation. But Avi comes to her rescue and becomes her backbone.

The lucid narrative style of the author makes this an interesting read. At times, the explication becomes too long and extra descriptive. Even though the authoress has succeeded in meticulously portraying the emotional turmoil of the characters, the meek character sketch of the characters nullifies the impact. The characters appear as mere caricatures. The vocabulary is exemplary, yet I could spot minute errors (like the use of incorrect past participle of sit in this sentence- Una glanced down to where her dad was sat~ should have been seated). ‘Sat’ is used in conventional or local dialect but the standard English does not allow the use of this form of the verb.

I liked the cover. Though it is very simple, yet speaks volumes. The plot serves as a delight for the ones who like reading fantasy thrillers. The story also exposes us to some of the stereotypes and social barriers like the friendship between opposite genders and cultural boundaries that restrict a person from being mindful.

Overall, ‘River Rule’ is a refreshing story that will not only intrigue you but also keep you on the edge of your seat.