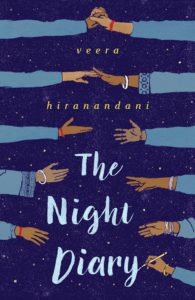 The British colonial rule led to the partition of our nation in 1947. While the world witnessed one of the largest migrations with over 10 million people on the move, nobody cared enough to lend a helping hand. Owing to the parochial conflict among some of the ‘great’ leaders, the citizens succumbed to terror, starvation, destitution and hatred. All this while we have read several true accounts of people who were a part of this ‘divide and rule’ policy. But ‘The night Diary’ portrays the struggle that the people faced seventy years back, through the eyes of a twelve-year-old.

Nisha, an agnostic, is a young twelve-year-old who believes that her dream of living a perfect life will come true shortly. On her twelfth birthday, her cook, Kazi, a Muslim, gifts her a diary and asks her to write about her experiences. Grabbing the opportunity, Nisha decides to write letters to her deceased mother narrating her daily routine. Religiously following the advice of her most loved elder in the family, she decides to write. It is through these letters that we get to know how complicated her life is. Being a child, she has little understanding of what is going on with her country. But her observation skill and the mature mind do not hold back her opinions. Her first entry in her diary is dated July 14th, 1947. She describes how chaotic her city has become. Gradually we get momentary access into the life of this little girl who deciphers some of the bitter truths of life.

‘Veera Hiranandani is a master storyteller’ and I cannot agree more. With a compelling and impeccable narrative, the author makes the story worth reading. She touches upon some of the harsh realities of life by making her protagonist question them innocently:
• Everyone knows who is a Hindu, Muslim, Sikh and Christian by the clothes they wear or the names they have. But we all have lived in the same town for years. How does India becoming independent go together with people being differentiated based on religion?
• Nisha’s mother was a Muslim but nobody speaks about that anymore. She questions her mother about the same- I guess we are Hindu because papa and dadi are. But you’re still a part of me, mama. Where does that part go?
• At one point Nisha says that she used to think of people based on their name, work or what they looked like. After the most dreaded news, she starts guessing the religion and tries to remember who has to go and who can stay.
• During their journey on foot to the other side, Nisha encounters a man who stabs the arm of another man in order to steal water. She wonders what ‘need and greed’ can do.
• She also expresses how ungrateful she was for the littlest pleasures of life. It is only when she doesn’t have any that she realizes their value.

Nisha’s character development is commendable. Her listening skills clubbed with her perception skills help her discover her true self. This book nearly sucks us into the plot and create an escape from our own lives. I feel that this book should be used as a reader for the children of the same age group so that they can be sensitized and made aware of the circumstances people lived in. ‘The Night Diary’ is not only journal entry, but also a poignant tale of survival of a family. It throws light on the relationship between a father and a daughter, the relationship between siblings and the relationship with Destiny.

Fine-tooth comb editing, subtle yet apt cover and flawless print quality make this book a blockbuster for me. It has everything I had hoped for.