Earlier used for trading between the Indian and Tibetan locals, Nathu La (La meaning Pass) lies at the Indo Chinese border. 56 km from Gangtok, one has to pass through Tsongmo Lake to reach this place. It is mostly covered with snow throughout the year and the subzero temperatures are very common. The pass constitutes the Eastern Himalayas and the beauty of the snow-clad peaks at the tree line is bound to leave one enchanted. 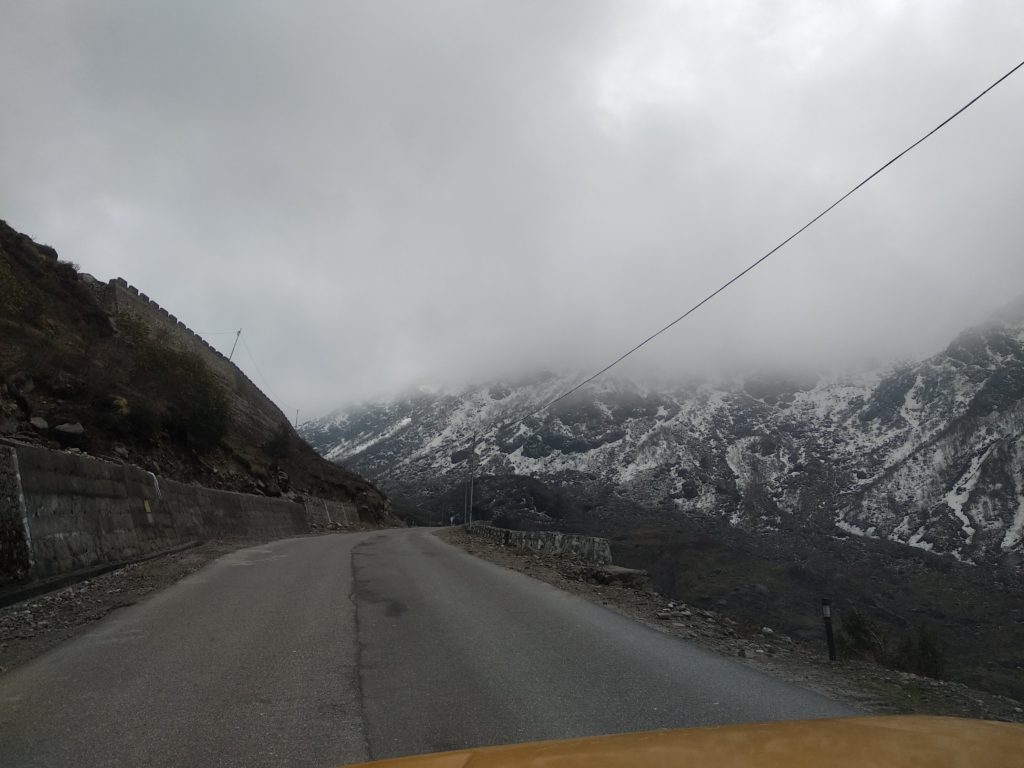 East Sikkim is a place that cannot be missed. When in Sikkim, it is vital to keep a day aside for East Sikkim. A half-day excursion is what is required to explore three major attractions here- Tsongmo Lake, Nathu La and Baba Mandir. In order to visit East Sikkim, one requires a permit from the Tourist Office (Gangtok). To the save the trouble, we asked our cab organizers (Rent-a-cab) to do the needful. For three of us, the cost came up to INR 4000 which included a trip to Tsongmo Lake, Nathu La and Baba Mandir. 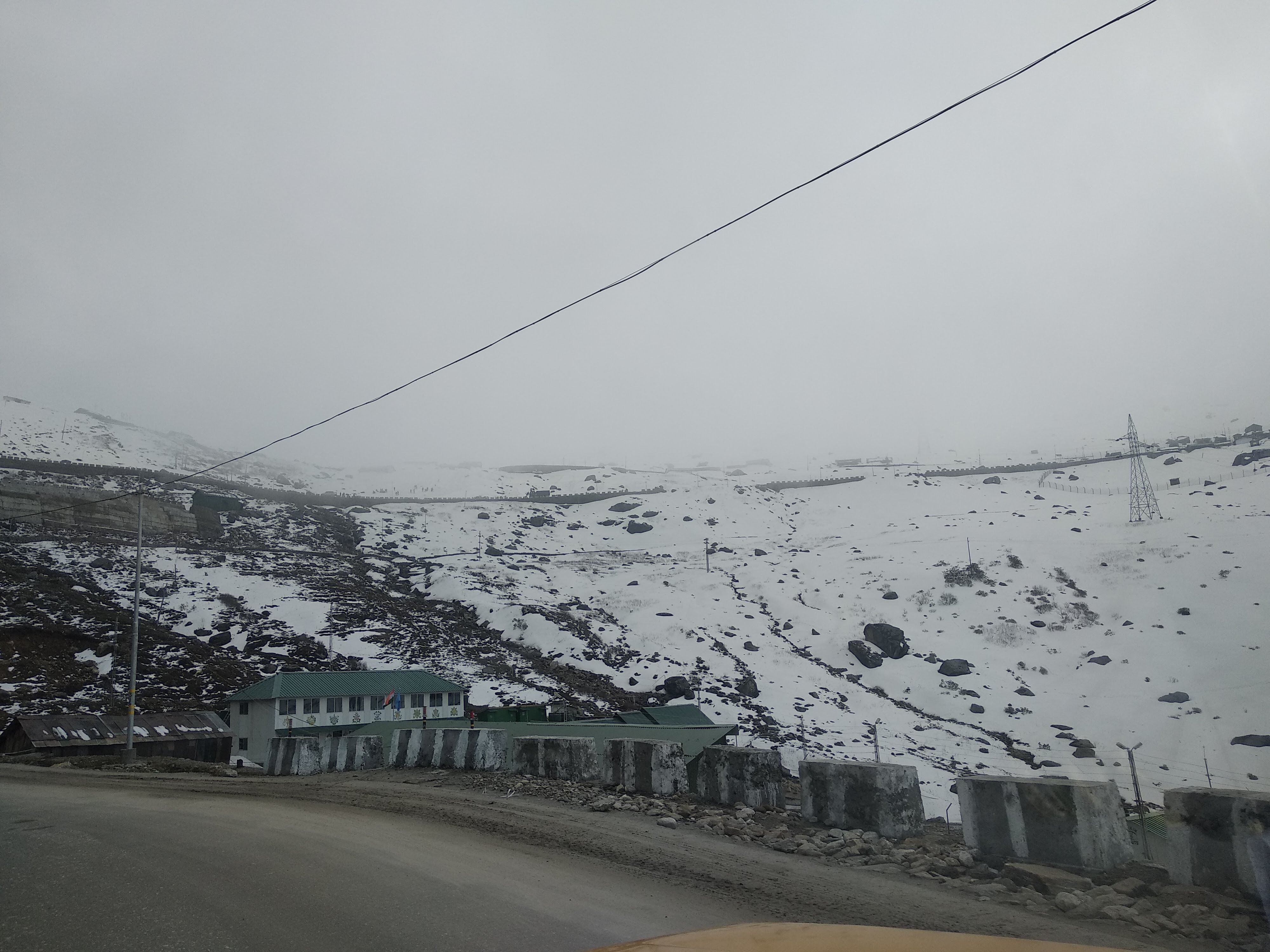 Beginning our journey early in the morning at around 8:00 AM, we directly headed to Nathula because the weather seemed dicey. On the way, we stopped at a local tea shop from where we rented gumboots and gloves. Each item is given on rent for 50 bucks. Since Nathu la is at an elevation of 14000 ft, the cold climate forced us to have tea and Maggi too. Getting back on the road was not tough because the road is well constructed unlike the roads in North Sikkim. We halted on the way to climb the Snow Mountain and play and reached Nathu La by 11:00 AM. Photography is strictly prohibited in that area. It was snowing when we got down from the car. Putting our best foot forward and bracing ourselves for a tough climb ahead, we used all our energy to ascend the steps that were then covered with snow. It was more like climbing a snow mountain. Every now and then we would slip and then get up again. 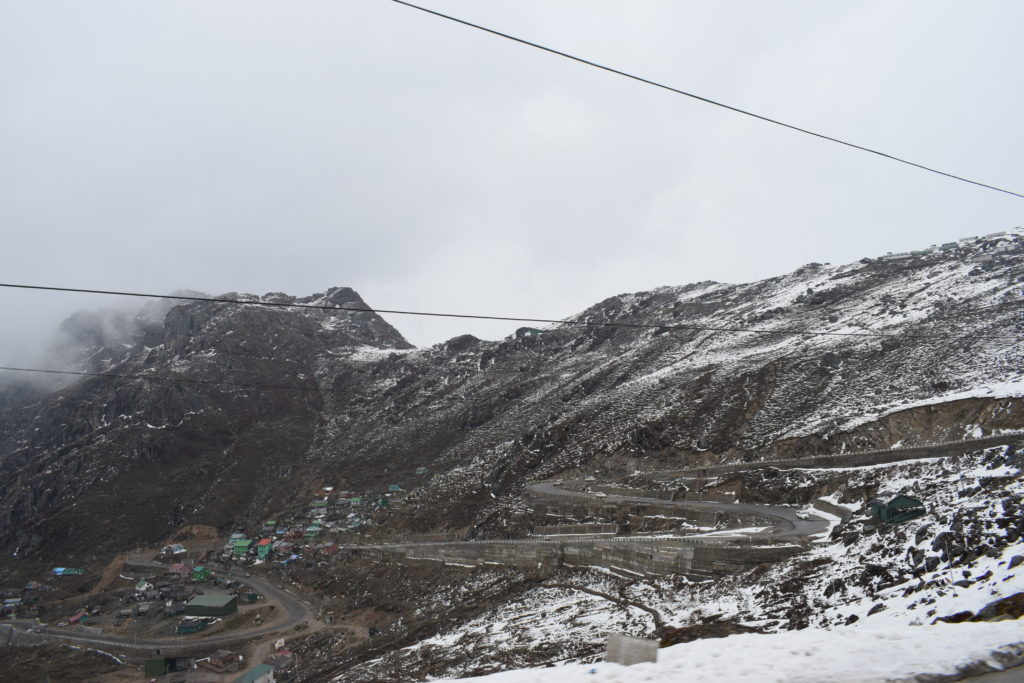 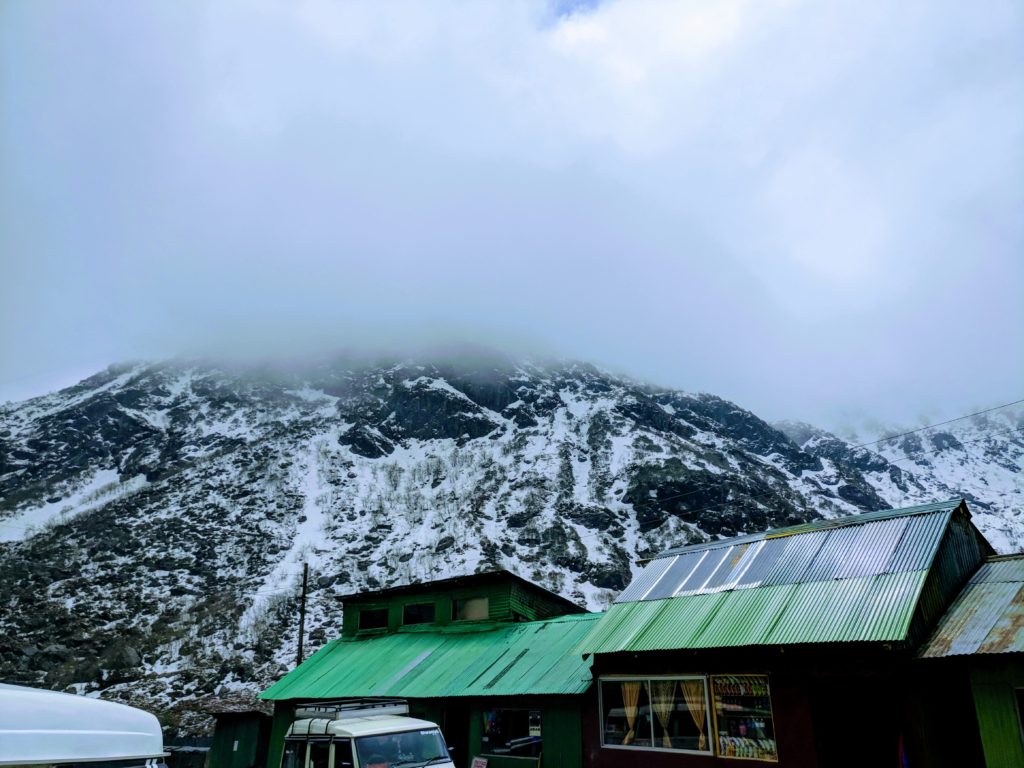 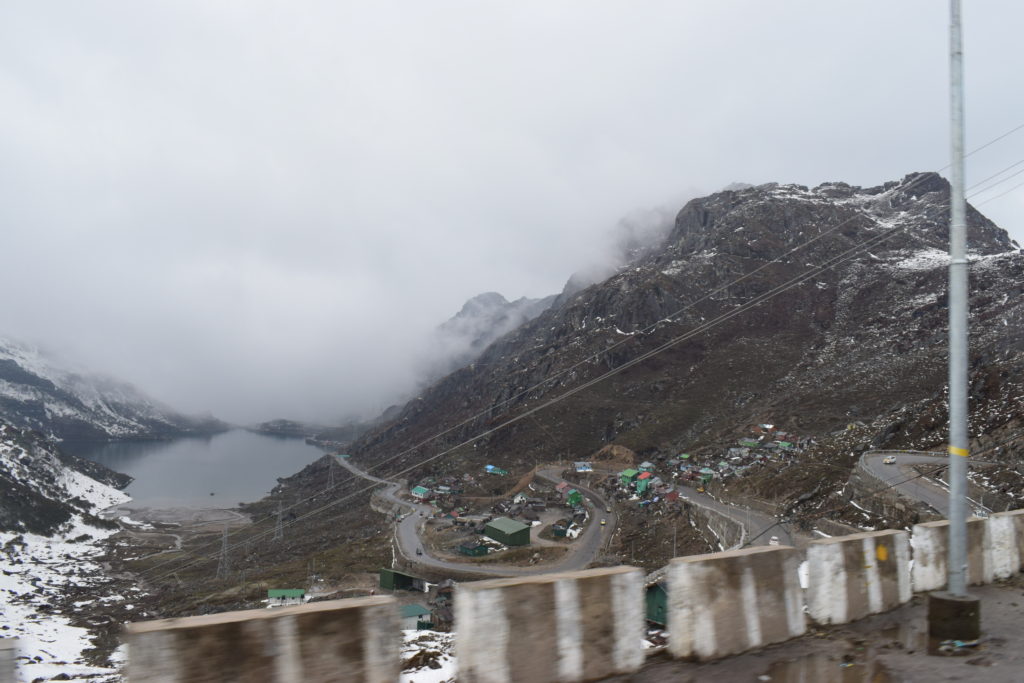 As we reached closer to the border, the heavy snowfall, subzero temperature and the altitude made it a little difficult to breathe properly. Also, the army men didn’t allow the visitors to stay at the top for more than a minute. Actually, there was nothing much to see. We could see the China headquarters and an iron fence separating the two lands. The snow had made everything nebulous. We came back to the car in another half an hour and enjoyed the snowfall for some more time.

Unfortunately, because of heavy snowfall, the route to Baba Mandir was blocked. Consequently, we started our journey back to Gangtok, planning to stop at Tsongmo Lake for pictures.

By the time we reached there, it started throwing cobbler’s knives (Heavy rain- Ireland). We despise the idea of hurting or causing trouble to animals for our own benefit and thus, we opted out from the Yak Ride. Tsongmo Lake is 1km in length and half of it was frozen in April. The landscape is majestic. Since the area is at the tree line, there is hardly any greenery there. Only the pastel shades of brown and grey paint the panorama. 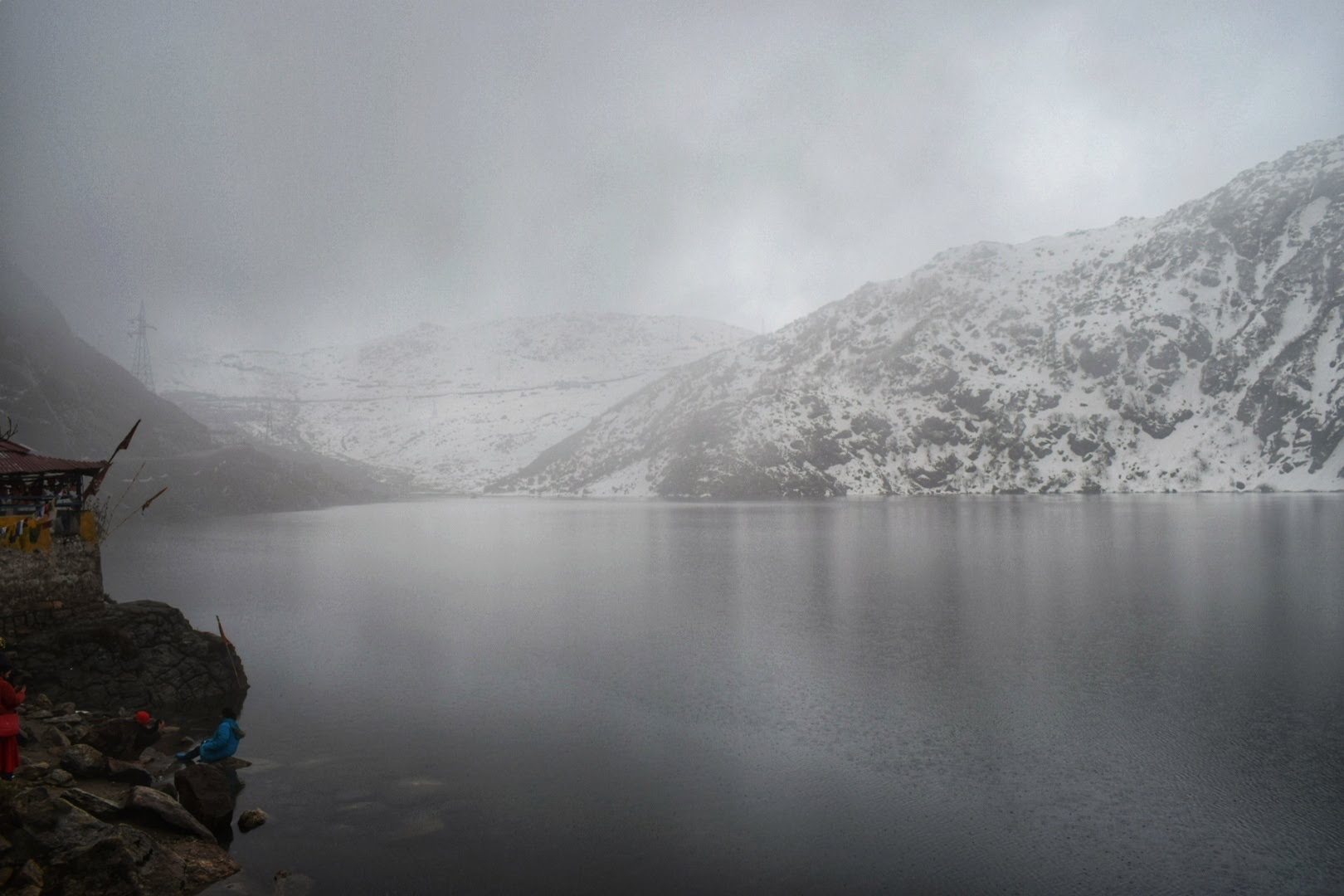 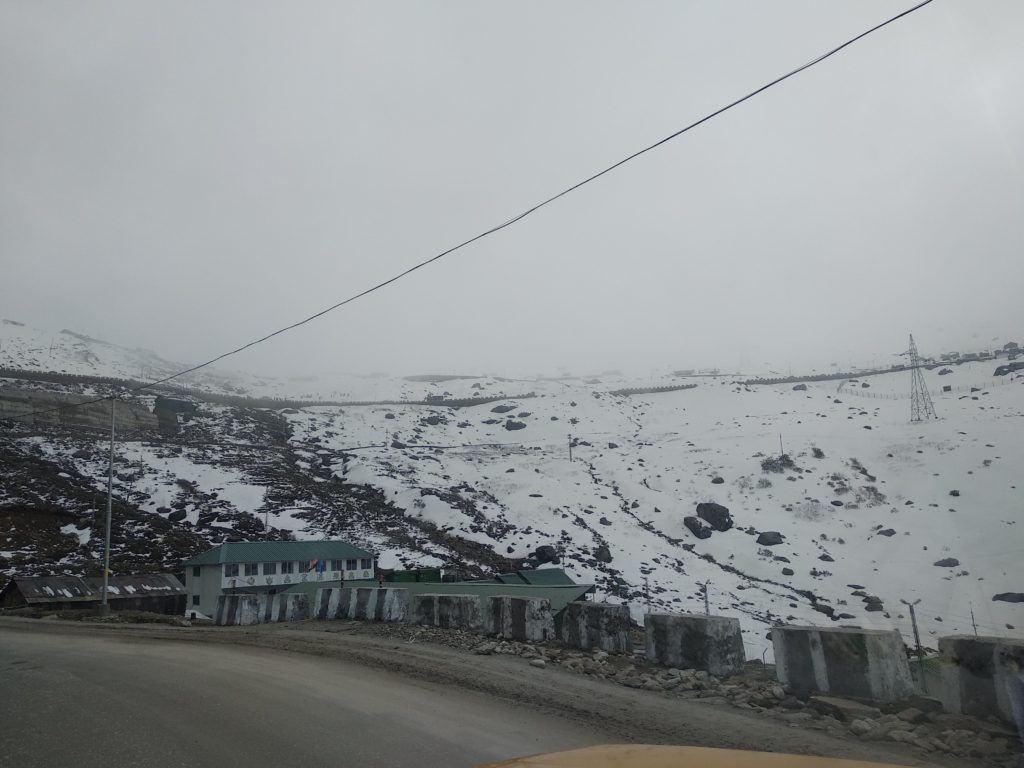 Sikkim is said to house the most natural landscapes that have not been blemished by human interference. It is advisable to book the cab on rent and ask those people to arrange for the permit. An important point to note is that the day you begin your journey for Nathu La, the driver will ask you to wait for half an hour to one hour for the permit to be given. You don’t have to do anything; everything will be done by the driver himself. Food is a problem up the hill, so carry snacks. Carry enough water too. One of the striking feature was that the small shacks that sell magi and tea have a heater placed under the table. It is such a relief to sit at that table and let the frozen legs become mobile again.

Some points to remember when visiting East Sikkim:

• Check with the locals to find out if there is snow at the pass. It is covered with snow almost throughout the year but fresh snowfall adds to the problem.
• Carry two to three pairs of socks, for they will get wet easily if you play in the snow. Change into the dry ones lest you want to get a frostbite.
• Carry your ID cards for verification. Carry photocopies too.
• Woollens will be required. Even the jackets and overcoats are given on rent.
• Avoid wearing sarees and suits. Wear pants or jeans because it becomes freezing cold at the top
• Request: Do not click photographs where the camera is prohibited. Respect the privacy of the Indian Army.

To know the details of our entire trip, click Sikkim Itinerary.
For further information, click the links below:
Things to do in Pelling
Exploring Darjeeling in half a day
Demanding Yet Beautiful North Sikkim
Gangtok at a glance