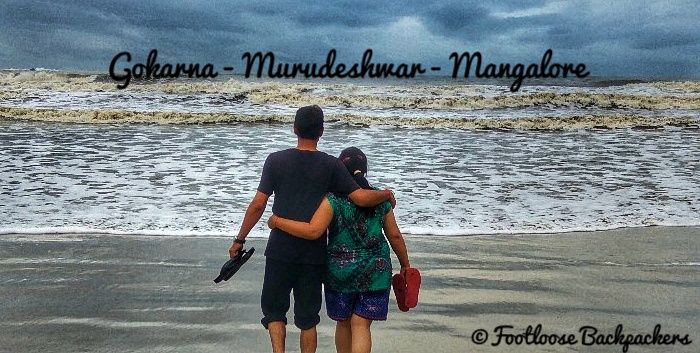 (The photographs used are all original)

We travelled to Gokarna and other listed places during the month of June. We (five of us) booked a taxi (Innova) and started at 12:00 AM on 11.06.2016 (Saturday). We prefer travelling during the night hours because this not only saves a lot of time but also makes the journey comfortable (less traffic). We reached Gokarna by 8:00 AM and stayed in Shivaprasad Hotel, located near the Gokarna beach.

Shivaprasad Hotel: This is a nice lodge/ hotel where accommodation is not only cheap but also comfortable. Since we had gone during the offseason, the prices were comparatively lower. The rooms were spacious and bathrooms were clean. The rent was as follows:

The hotel has a provision of hot water during the early morning hours, after which there is ice cold water throughout the day.

**Food is one of the major problems in Gokarna. There are no hotels or restaurants nearby. Shivaprasad has a food outlet of its own and that serves only Upma, Idli/ Vada and Puri Sagu for breakfast. The food is okay; it can be eaten when nothing else is available. 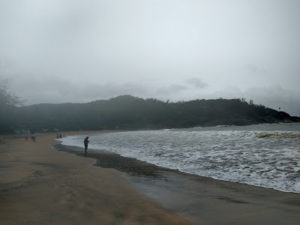 We started for Om Beach at 11:00 AM and reached there by 11:30 AM. Before that, we had breakfast in the food outlet of Shivaprasad.

Om Beach: Since it was raining cats and dogs, no water sports were available. But it was fun strolling on the beach and picking up seashells. The waves were very strong, and so it was not advisable to go deeper into the sea. The place is very scenic and it offers ample opportunities to get yourself clicked. The much talked about ‘Namaste Café’, offers nice food at affordable rates. There are washrooms which are clean and hygienic. We spent around two hours on the beach and then started for Kudle beach. 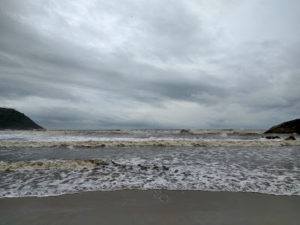 Kudle beach: With extremely low maintenance, this beach is a littered place. The beach is beautiful but the garbage spoils the fun. The waves were strong and yet again it was not advisable to go deeper into the sea. Nothing much was there on this beach and we spent time walking along the length, enjoying the view and relaxing our minds.

After Kudle, Paradise beach was next on our list. But, unfortunately, it was closed because of the bad weather. The trekking path was not accessible and the road to that beach was blocked. Probably, this is the cleanest beach in Gokarna. Only if we could see it!

Following this, we headed for Gokarna beach. Only when we went there, we realised that that was the closest beach from ShivaPrasad. 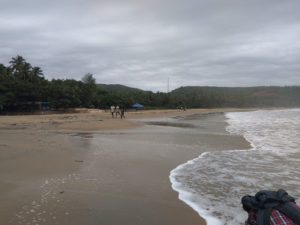 Gokarna Beach: This was one beach where I could see people actually enjoying themselves. We sat on the beach and enjoyed the waves. The only drawback was the availability of a restaurant. The highly talked about ‘Premas’, does not allow people inside if they are in wet clothes. Other than this, there was no other place to eat. Hence, we had to drive back to Shiva Prasad for dinner. We spent the night in Gokarna and started for Murudeshwar, the next morning. 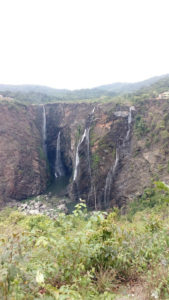 Jog Falls: On the way to Murudeshwar, there is a junction, the left side of which leads to Jog Falls (61 km from the junction). The road is nice and the traffic is also less. But during the month of June, the water was scarce in the waterfall. The view is superb and this is indeed, the largest waterfall in Karnataka. People are not allowed to go down and get wet. However, a staircase leads to a point which is really close to the foothills of the mountain from where the water is falling. There are enough options for food and water. The entry ticket (parking ticket) costs around 50/- INR.

It took us two and a half hours to finish the tour of Jog Falls and after that, we started for Murudeshwar. The road to Murudeshwar is really very nice. 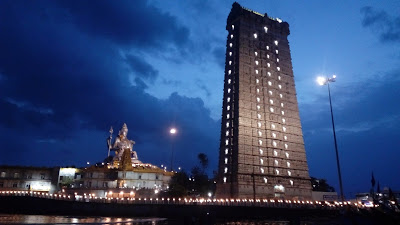 Murudeshwar: We reached Murudeshwar at around 04:30 PM and booked the hotel for staying. We booked Dhenu Atithya. Again, we opted for two rooms- one triple and one double. The prices were cheap and affordable. The best part was that this hotel had a restaurant of its own, which not only served South Indian food but also North Indian food.

The rent was as follows:

Murudeshwar is a small city. We relaxed for one hour and then went out to explore the temple and the beach. The temple is a huge one. It took us more than 1.5 hours to explore the entire temple. It is magnificent and you are ought to feel blissful after visiting that temple. 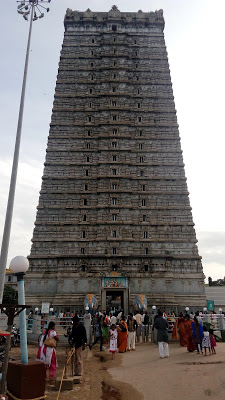 Raj Gopura: This is a tall building at the entrance of the temple. The entry fee for this building is 10/- INR per person and there is a lift that operates from ground floor to 18th floor. The floors in between are closed. The whole point of going to the top is to have a look at the city-view and enjoy the Murudeshwar beach. Who would not spend ten rupees for such pleasure?

Murudeshwar market is one such market which has lots to offer. There are changing rooms/ bathrooms, shops selling shells and other things. Several stalls can be found selling coconut water. Due to the monsoon, one side of the beach was closed. We, however, managed to go to the other side. Yes, the waves were really very strong. Water was cleaner compared to the Gokarna beaches. We collected sea shells and played with water for some time. We started for our hotel at about 07:30 PM. As mentioned before, Murudeshwar is a small city and you do not need to travel by any vehicle. All the places- temple, beach and hotel, can be reached by walking.

We had dinner in the restaurant and then rested, for the next day we had to leave for Mangalore.

Maravanthe & Malpe: We started for Mangalore at about 10:00 AM after having the breakfast. Yet again the road (NH17) was fabulous. Road to Mangalore was awesome because there is a stretch of road which is sided by the Arabian Sea and the view is exceptional. 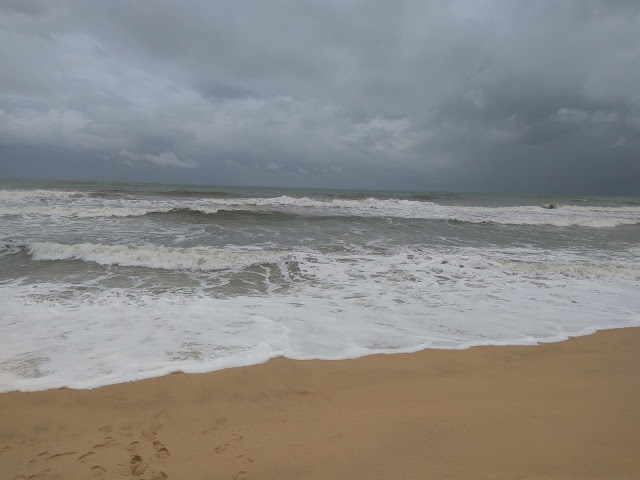 We stopped at Maravanthe Beach, the beach which had white (rather yellow) sand and so many sea shells. The view was breath taking. Since this beach is by the side of the road, we stopped for half an hour and then resumed our journey. We reached Udupi and headed towards Malpe beach. At this beach, the Ferry ride to St. Mary’s Island is really very famous. But unfortunately, the rides were closed. We looked around the place and satisfied ourselves with the pictures that we clicked. Malpe beach is another beach which has blue water and is cleaner than Gokarna Beaches. There are canopies placed at regular intervals. The waves were strong and thus, we decided to not go into the sea further. After spending an hour or so, we started for Mangalore. 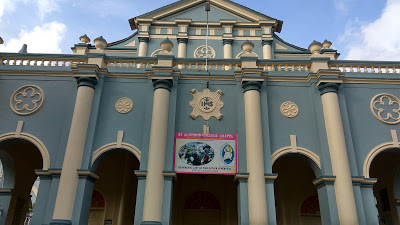 Mangalore: We reached Mangalore by 2:30 PM. We had booked OYO rooms and our hotel was Rasa Prakash. With nice ambience and wifi facility, the rooms were quite big. Mangalore is a crowded city. Having spent three days in complete bliss, we did not like the climate here. It was hot and humid. However, we started for Panumbar beach. The beach was not that commercialized but still had facility for food and water. There were horse rides, small rides for kids and provision for paid photography. 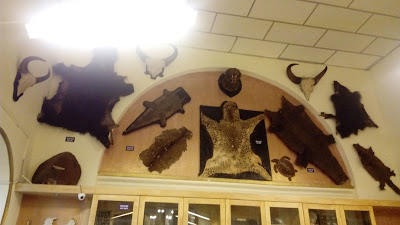 The waves were strong and so we weren’t allowed to go deeper into the sea. We spent around 1.5 hours at this beach and then started for Tannir Bhavi beach. By the time we reached there, the sun had almost gone down. The beach was isolated as we could hardly spot people there. The view was scary and the sound of the waves made us take a step back. We did not dare to even touch the waves. Clicking some photographs and shouting out names, we decided to head back to our hotel.

Back to Bangalore: Having spent the night in Mangalore, we started at 09:00 AM and went to St. Aloysious Chapel. That was something extraordinary. The campus also had a museum and the fee for the museum was 5/- INR per person. The chapel has been preserved so well. With painting on either side of the walls, the chapel looks beautiful and there is a story hidden in every painting. This was definitely a must-watch place in Mangalore. From here, we left for Bangalore.

Trust me, there were no eating joints on the way. And this had angered the mice in our stomach. Luckily, after two tiring hours, we spotted one restaurant- Surabhi.

Some important points to remember:

1.Whenever visiting a beach, carry shorts. Do not wear thick fabric as it would take a long time to remove the sand. Also, drying clothes would become a big problem.
2. Carry extra clothes because you cannot resist from getting wet in the sea
3. You can carry your cell phones/ camera and keep them safely in a backpack (waterproof). But in case you are planning to indulge in water sports, then ensure that you either leave your valuable items in the car or with someone
4. Wear slippers
5. The thought of playing in sand might sound gross but enjoy the moment. You will never regret it. 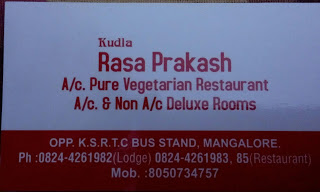 I hope this information comes in handy.

One liner for the trip: Ideal trip to let one’s hair down!

“The gladdest moment in human life, me thinks, is a departure into unknown lands.” – Sir Richard Burton