‘Actions do not cling to me because I am not attached to their results. Those who understand this and practice this, live in freedom.’ 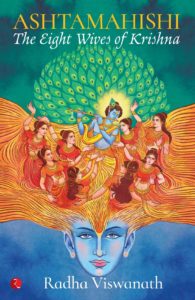 Krishna is one character from the Hindu mythology who has always evoked capricious verdicts about his choices. When he gave a new perspective on the concept of Dharma, it was misunderstood by many as chicanery and delusion. Even though his purpose on Earth was to wipe out evil by advocating Dharma and giving it a new meaning as per the changing times, he was often mistaken. His personal life was no different. Known to be in more than one relationships, Krishna’s polygamous personality is a reason for resentment amongst his disciples.

‘Ashtamahishi’ focuses on the eight wives who played an imperative role in Krishna’s life. The story describes Krishna’s bond shared with these eight women. While some he earned, some were abducted and some given, these eight entered his life because of mutual love and respect. ‘He who has no attachments can really love others, for his love is pure and divine.’ This line by Krishna further substantiates his polygamous personality. The story exemplifies the personality of Krishna as a lover, husband and as an individual. He is caring and dutiful; he devotes himself earnestly to each of his partners. At the same time, he showcases the ability to use his wit to thrive in the complexities of life.

Riveting narrative and brilliant storytelling add to the flavour of the story. Beautiful characterization of the wives helps us associate well with them. Krishna’s wives were not alike. They were demanding as well. Metaphorically, Krishna’s philosophy of life and balance helps him deal with different kinds of people at the same time.

Overall, this story has been interwoven with myth and imagination, yet the eventual result is plausible. It touches upon that aspect of God’s life that we seldom get to read or know.