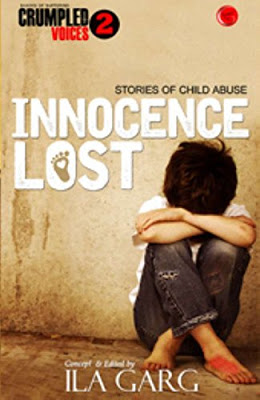 Summary
“Innocence Lost” is the second part of the “Crumpled Voices” anthology series. Child abuse has always been a clandestine topic that is ignored or neglected. This book makes a successful attempt at helping the people realize the pain that they are inflicting upon children be it mentally, physically, emotionally, socially or psychologically.

My opinion
The overall concept of the book is nice. The cover is catchy (kudos to Amol Karambe) and the title also suits the purpose.

Eighteen by Naisargi Bhatt: A well crafted poem, with every line perfectly relating to the life of every girl.

Pang of history by Pramit Sarkar: This story brings out the harsh reality of the parents who pressurize their children to excel in academics. The story is perfectly cut and dried.

The lost and found self-respect by Aditi Sahu: This is a startling story where the victim of child abuse is the mother of a small girl. Overall, twisted plot with a tinge of love and trust. Good effort by the author.

The white lily by Supriya Parulekar: The story is one of its kind because the description of ‘monsters’ suits the devils of lust. The story is fast paced and predictable, and highlights the emotions of an innocent mind in a subtle way.

A cry- help me by Sunanda Bhadra: This short story will pierce through your conscience and make your groan inwardly.

The lost dreams by Swathi Shenoy: Although I did not find this story matching the context of the book, the story was a good read.

The shadow by Dr. Sunil Kaushal: The plot of the story is very strong and the narration makes it stronger. The climax was sudden but inspiring. Good plotting and lucid expression.

The guinea pig by Piyush Kaviraj: This story shook me from inside. I had, till now, not known about the use of children in scientific experiments and that too the painful ones. The author has put forward the cruel reality in form of a heart wrenching episode.

The unheard cry by Brinda Tailor: It is rightly said, “A lot of parents will do anything for their kids, except let them be themselves”. This story perfectly describes one such scenario. Where Engineering has become the paramount choice in the educational field, every parent wants their child to become one. But during the process of making one, they lose what they treasure the most. A poignant read!

The loud silence by Shreya Ganguly: This story has been written nicely with subtle element and adequate emotions. The irony of life is such that the emotions of a prostitute are imperceptible to the people. Why? Because she is a prostitute. A well crafted and balanced story.

Tales from a pit deep down by Vaisakh E Hari: No doubt the story is heart touching but the language usage is ambiguous.

A Tryst with Naaz by Leena Ratti: The story runs on a different track and the climax acts as an icing on the cake. The diversion from the general norm of sexual exploitation categorized as the child abuse, grabbed my attention. Good read!

Just a lucky day… or not? by Shikha Kaul: Marvelous feat! Yet again Shikha Kaul has come up with an interesting plot. This is one of the stories I liked the most.

Left to be estranged by Ummul Fazal Fatima Khan: “To be in your children’s memories tomorrow, you have to be in their lives today”. A different approach and perfect amalgamation of emotions of a neglected child.

That shade of vermilion by Tanya Shrivastava: It is not always the emotional turmoil or the child labor that falls under the category of child abuse. Domestic violence is an equal culprit. This story has been written with somber emotions, keeping in mind the truth that lays hidden behind the veil.

There are two stories I liked the most: Just a lucky day… or not? by Shikha Kaul and Left to be estranged by Ummul Fazal Fatima Khan.

Overall Drawbacks
The book lacks proofreading and there are several editing mistakes, which was much unexpected. The grammatical errors are frequent. Page 131, the header of the page is one of the major mistakes in the book. Some of the stories were off the track but the plot was good.