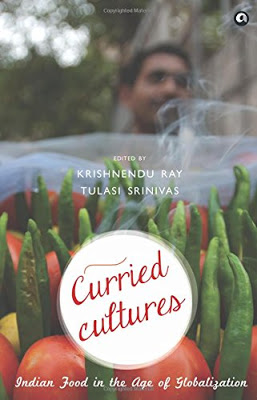 Food is our necessity and our desire. It is that integral part of our lives without which our survival is inconceivable. Over the years, the concept of ‘food’ has changed drastically. With what was called staples of a particular region, people have now become more receptive to foods of different origins. Accordingly, the taste buds have evolved too; they can now bear the taste of continental cuisine along with Thai, Mexican, Asian and Indian. Though the western countries have a diverse potpourri of mouth-watering delicacies, the Asian continent has always had an upper hand over them owing to the inherent culture and the culture transferred to our land during globalization.

An aperitive guide on how the food has evolved over the years, ‘Curried Cultures’ offers an insightful perception of the change in the colour, texture, and taste of Indian food. There is no doubt when one says that the Indian food is the most appetizing and the most influencing food in the world. The love and attention a dish gets in the South Asian land are anytime more than the thought given to the people. The book explores how Indian food has changed with globalization. There are numerous essays that elicit the impact of commercialization and how the recipes have made their way to foreign lands.

The author (s) prowess in presenting the content after much research is worth appreciation. The language is simple but there are certain terms that might take time to be comprehended. For the ones who do not have much idea about globalization, this book might surprise you with the information it has in store.