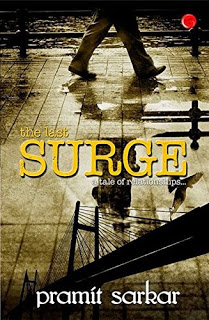 Summary
“The last surge” is a story plotted in the streets of Kolkata. Gabriel, the protagonist, is a dab hand at playing football. The female lead is Rimi, who is an orphan, but lives with her aunt. Gabriel falls in love with Rimi during his quest of finding out the person who hid his shoes during the final tournament of football and eventually loaded the dice against him. The elegance and the magnificence of Rimi make him fall head over heels in love with her, at the first sight. And Gabriel is taken unawares when Rimi reciprocates the same feelings for him as well. But love is always a mystery- sometimes glorious and sometimes painful. The tables are turned when Rimi decides to marry someone else, leaving behind Gabriel, at the altar. The thorns of betrayal suck out life from Gabriel, each day, unless he finds solace for his yearning heart, by adopting a daughter (Sneha) and deciding to stay bachelor lifelong. He leaves football and instead becomes a relationship counsellor. Such is the irony of life.

Probably Gabriel thinks that things will be easier after deciding to move on. But who knew what life had in store for him. When his sister, Esabelle, narrates the story of his long lost love to his beloved daughter, her daughter decides to find Rimi, for her father and get the answers from her. Lo and behold, Gabriel meets Rimi in his office but thing get heated up. He surrenders to destiny with fate accompli. And in the attempt to avenge the treason meted out to him, he meets with such an end that is blissful in its own sense.

My opinion
The novella is a bodice-ripper set in the land of Bengal. The theme is appealing. The characters are crafted very well. Somewhere the climax of the story resembles the climax of the Bollywood movie, “Raanjhaana”. None-the-less the depiction of relationships is impeccable. The story gives an insight into the relationship shared by an adopted child, with her father and that is ethereal. Love is unpredictable, it makes you realize how weak you are and how strong you can be. The love-struck protagonist, Gabriel, is successfully able to grab the attention of the readers such that they feel connected to the story. It is always said that a woman is the only creation of God that has the ability to fit into different roles of life, perfectly. But Gabriel proves this saying wrong. A perfect brother who caters to the needs of her sister- emotionally, psychologically and mentally; a perfect father who cherry picks the opportunities for his adopted daughter and tries to make life, a bed of roses, for her; a die-hard romantic who continues to suffer through the pangs of betrayal even though there is a chance to move on and have a life of his own. On the contrary, the female protagonist, Rimi, has been portrayed as the person who is all things to all people and believes in calling a spade a spade. The author has put forward a balancing act in sketching the character of these two people.