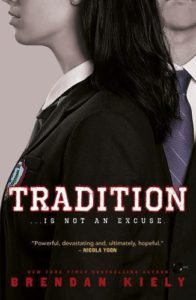 Very often, we find people enjoying ‘the comfort of opinion without the discomfort of thought’. They take pride in not taking a stand for their core values. However, they are oblivious to the fact that true justice will only come when the unharmed are not as indigent as the harmed. ‘Tradition’ by Brendan Kiely can be understood as a call to arms to protest against the prevalent set-up in most of the educational institutions in the west. This is not just a story but also an archetype of the unheard and unknown traditions in the colleges. Reeking of patriarchy, misogyny and sexism, this novel clearly outlines and defines the mindset of people who are barking up the wrong tree.

The story highlights the struggle of a neophyte in a highly acclaimed institute- Fullbrook Academy. James, also known as Bax, avoids public eye as much as possible; he abstains from borrowing trouble. Contradictory to his personality is Jules, who isn’t afraid to call a spade a spade. She is a feminist who advocates ideas against patriarchists. They both, together, embark on a journey that unravels the hideous secrets of the ‘prestigious’ institution. The author subtly touches upon some of the most serious issues like sex discrimination, ethnocentrism, xenophobia against the LGBT community, and patriarchy. The protagonists question the virulent traditions of Fullbrook that have infected the atmosphere; they take a stand for what they believe is right and in turn invite more foes than allies in their lives.

The plot of this book moves at a comfortable pace and evokes intense emotions. Not only does the plot highlight the callous mentality of the society but also throws light on the struggles of a risk-taker. However, the narration lacks cementing. As a result, it becomes difficult to begin again from where you left. Nevertheless, the messages are plenty and they occur naturally in the plot. Especially Jules- who is the centre of all attention- acts as a catalyst that triggers the angst in the mind of the readers as they begin to question the squalid practices and the loathsome traditions being followed.

As I read further, I could empathize with Bax more who seemed to be between the devil and the deep blue sea. He juggled between keeping his record immaculate and trying very hard to overlook bigotry. He is just like any other new kid in a boarding school who tries to fit in and gel well with others. Jules, on the other hand, is inspiring and audacious. Her courage is what keeps the story going. There is an odious Hackett, an impetuous Freddie and an ungenerous Gillian who add flavour to the story. The power of the plot is realized when the duo- James and Jules- decide to fight all odds and militate against the preposterous system that keeps tightlipped for the sake of its students’ future (read boys’).

Targeting various stereotypes and criticizing the ubiquitous traditions, ‘Traditions’ is definitely worth a read. Even though the plot is loosely knit, the story is strong and addresses major issues that act as a cog in the wheel of progress.