She had just got up from the dinner table when a sudden gust of wind blew off the lamp. The battery of the radio also went dead simultaneously and a hush descended over the cozy environment of her small cottage. A sudden chill ran through her. She hastily went near the dressing table and opened the first drawer. It was filled with paper cuttings, all pins, gum, punching machine, etc. One of the all pins pierced the tip of her index finger and she pulled back her hand quickly. She could sense a drop of blood appearing on the hurt surface. Still she just wiped it off and continued searching for the candle and the matchbox. Finally she found it and breathed a sigh of relief. She lit all the five candles and made the room all calm and comfortable once again. The ambience was so soft that she could hear the candles speak amongst themselves. After washing the plates and setting everything in place, she went into her bedroom and started searching for the book she had planned to read. Hush. All the candles were blown off. This time she was really scared, for never before had she experienced such a thing. She reached for the kitchen and took hold over a small knife and paced towards the main door to check what was going on. 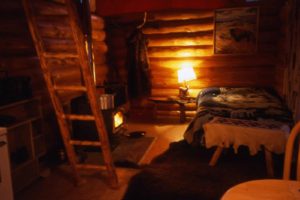 The door was locked. From inside or outside- she did not know. Perhaps there was no time to think about that. She ran towards the window in the kitchen. To her horror, the window had blood stains. Somehow, she managed to overlook them and tried to open it but failed. She again lit another candle, but it was blown off too. All her efforts for rescue were going in vain. But she did not lose hope. The weather was getting worse as well. Thunderstorms and torrential rain added on to the gloomy atmosphere.

It was getting cold. She grabbed her shawl and pulled a chair near the window. The chain of thoughts was running fiercely through her mind when the sound of an opening cabinet, stole all her attention. She was terrified. Who could be there? Was someone playing a prank on her? What if there was a thief or a murderer or… Ghost? All these questions made her feel weaker. Gathering all her left strength, she moved towards the sound source. Lighting a candle she saw tiny carpet beetles coming out from the half-open drawer of the cabinet. These creatures were marching in a line as if preparing for a great battle. She stomped and killed most of them. But more and more started coming out. The wax of the candle had started falling on her cold soft skin. But she could bear that. What was unbearable was the sight of these ugly creatures. She kept the candle on the shelf and ran to get a broom. Not long before she had gone, when the sound suddenly stopped. Again there was complete silence. But her conscious was not ready to accept this. She felt uneasy and frightened. There was more to come. She stood still at one place and constantly stared at the cabinet. Nothing moved and there was no sound. The only sound that was audible, was that of her heart throbbing at the fastest pace.

Her chair was placed a few centimetres away from the cabinet that had an attached mirror. The light from the street enabled her to see a vision of herself in the mirror. She grabbed a bottle and drank water. She looked up again to in the mirror and the sight made her blood run cold. It was not herself that she saw on the other side. But it was someone else. She rubbed her eyes to ensure what she saw was right, but all in vain. The person or creature or whatever it was, on the other side of the mirror, started making obnoxious sounds. It felt as if something bad was about to happen.

For some time there was stillness. She, somehow, managed to ask, ” Who are you?”
“Grrr… Grrrr… I am Dybbuk. ”
Before she could speak anything else, the spirit broke the mirror and started coming out from the other side. With a loud thud, he jumped towards her. Meanwhile, the candle blew off and there was complete darkness. She shouted for help but it felt as if her cottage was filled with vacuum. With a blurred vision, she saw long, pointed fingernails moving towards her neck. She moved back but got obstructed by the window pane. Dybbuk moved more hastily towards her and grabbed her neck. It tore apart the skin on her right hand and she yelled with pain and terror. She still retaliated and struck the spirit with the small knife. But all efforts were futile. Dybbuk was thrice as powerful as her. It lifted her over its shoulders and tossed her over on the floor. By this time she had almost given up the hope. A bone or two was broken and she was not even able to get up or run. The spirit was blinded by the darkness for some time and in the meantime, she crawled and hid inside the almirah. The loud howling sound of the spirit made her shiver. All she could do was pray for her life. She tried to remain calm and avoid making any noise. She remembered what she had read about Dybbuk, being a spirit of a dead person who tries to take possession of a new body. She remembered how she was warned a thousand times, before moving into this cottage. She remembered how she had had a pitiful life and that she thought maybe she would find peace here. She had been having ill premonitions lately but had not paid attention to them. Finally, the dreadful end was there in front of her.
There was complete silence. She thought that maybe luck had favoured her and the spirit had gone. She tried to peep through the small keyhole and saw nothing but complete darkness. She moved closer to the keyhole to take a look again. Nothing. A sigh of relief for her. Just then she heard a heavy breathing sound. She tried to take small breaths so that the sound diminishes. But the sound became more lucid and enhanced. She started sweating. Suddenly she felt a presence in the almirah itself. She turned and was appalled. Dybbuk stood right behind her. It stretched out its hands and she fled at full speed. This time she could not find a better place to hide. There was no time left. She stood behind the kitchen door.

She was gasping for breath and unfortunately, in the total stillness, Dyubbuk heard her presence. It moved towards her and lowered itself towards her face. She tried to hit dybbuk but her hands went right past the body. It was a spirit indeed. A snide laugh escaped the face of the spirit and it was ready to take possession of her body. Just then, she opened her eyes and realized that the entire terrifying ordeal had been a dream.