Come October and I am back with another interesting book. Several movements promoting gender equality and feminism are doing rounds and call it sheer luck or chance, that I stumbled upon one of the books that inspires young women and encourages them to dream. Author, Jana Williams, believes that it is not wrong to live in a cloud-cuckoo-land because one’s imagination originates in that world.

Jana Williams is a believer. She believes in the power of stories. Her childhood was spent in stargazing from the backseat of her father’s car. She paved her way through the difficult phase of life and stands tall and proud where she is at the moment. A mother, a philanthropist and a write, Jana Williams’ story inspires us.  She is an advocate of literacy as she believes that education is the stepping stone to success. Rather than reading books only for the sake of language, Jana imbibed the good qualities of the fictional characters, especially women, who strived to eke out a living in the world. She hopes and prays that all the girls and women become capable of deciding for themselves and take a stand for their dreams and aspirations.

The deep-space transport ship, the Vera Rubin, is light years from Earth when botanist Elle Silver begins to question the use of their space-travel drug, HCH.  Elle notices a growing number of her friends and fellow colonists awaken from their 90-day sleep cycles exhibiting a variety of negative side-effects and she begins to believe the drug is the culprit.  Some of the effects are minor, dry eyes and lack of appetite. Other symptoms are a bigger concern on a tiny ship packed with colonists.  With each sleep cycle completed, more and more colonists awaken both confused and barely concealing a simmering rage – rage that could be a catastrophe on a ship as crowded as the Vera Rubin.  Elle needs proof, but she also needs a plan. If the drug that allows them to travel deep-space is at fault, what then?  Elle and her friends Ashok, Achebe and Jin-Hai are pressed to their limits to find a solution to their problem before the ship erupts into chaos… with light years left to travel.

Three hundred years in the future, Elle knows of course that she is from Earth and is travelling aboard the transport ship the Vera Rubin with her teammates and friends. Elle, along with Achebe, Ashok, Jin-Hai and Micah, is 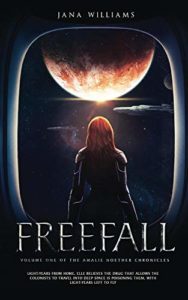 part of a team of 150 young colonists destined to make landfall on a new planet, Amalie Noether.

Elle easily recalls the excruciating anxiety of discovering at twelve that she was the youngest cadet assigned to Moonbase deep-space program. What she doesn’t know is why. Every child on Earth at the time was planned for, cared for because they were so few. And yet Elle was apparently abandoned and became a ward of the state. Why? In spite of that shaky beginning – Elle works hard and is triumphant when chosen to be part of the most important space launch in Earths history.

Once launched, a new array of questions begins to haunt Elle. She notices subtle changes in some of her friends’ behaviour after they awaken from their sleep cycles. Many are merely groggy and slow moving. But some are becoming increasingly anxious and angry with each cycle they complete. Elle wonders if the drug that allows them to sleep-travel through the bulk of their journey could be at fault. On a shuttle as small as the Rubin escalating tension and anger could be disastrous. Yet Elle experiences no side effects at all. Why?

As the months pass Elle finds herself stretched to her limits as both a scientist and friend. She races to find answers before her new family self-destructs light years from home.

Read my review of this book here.