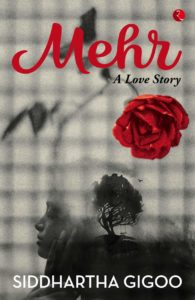 It is said that vulnerability is your greatest asset; it indicates that you are open to bounty and beauty. When you are vulnerable, your heart rages with emotions that otherwise succumb to the slumber. ‘Mehr’ is a love story that narrates a tale of two people who were joined by emotions and separated by communities and land.

‘Mehr’ exemplifies the turmoil of the heart. Revolving around two major characters- Mehr (a Shia Muslim from Pakistan) and Firdaus (a Kashmiri from Kashmir), the story uses subtle satire to expose the truth of the boundaries. It pinches the heart to read how love has no place when we talk about conquering lands.

Mehr, who is vulnerable and has a kind disposition, finds herself on the horns of a dilemma when the people close to her either leave or betray her. She finds solace in Firdaus, who comes across as a very benevolent and understanding human being. They fall prey to love after exchanging emails for some time. Following this, the story becomes very predictable and the protagonists embark on a foretold journey. The only meaningful twist is how they struggle for their love between borders!

Placid narration and facile characters add on to the monotone of the book. The mediocrity in lavish fails. To top it all, the jumping tenses might make it difficult for the readers to associate well with the events.

Nevertheless, the potpourri of emotions ranging from nostalgia to affection and hatred to trauma, all make the story stimulating. Brisky paced romance with several twists and turns to keep the story moving in spite of the flaws. The monologues are short and to the point. The story touches upon certain themes that touch the heart- the wishy-washy state of mind when it comes to, the fear of social stigma, the concept of moving on, the conflict between love and parents and many more.

One of the most striking features of the book is its cover and the print quality. Overall, ‘Mehr’ has all the necessary elements of a drama sequence. It is a quick-paced story that evokes honest emotions. However, the black and white approach could not pique my interest.

Best Wishes to the author!