‘Success is only determined by what you are willing to sacrifice for it.’ 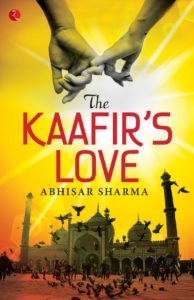 The year 1947 was too quiet for hope, and then too loud for safety for the Indians (words of Radhika Swarup- Where Rivers Part). Once known for its rich heritage, India was divided by religion and caste owing to the school of thought of certain leaders who believed that people are treated based on their religious beliefs and colour. Consequently, the divided nation developed hatred towards people who did not belong to their community.

Even Inter-community marriages faced the wrath of communal issues. ‘The Kaafir’s Love’ is one such attempt that makes the reader’s blood run cold. Amidst a quintessential plot that reeks of antipathy, grudge and also of affection, this story takes the readers on a roller-coaster ride. But an anticipated story, monotone expressions and precipitous climax put the plot on the line.

Sameer and Inara are the two protagonists who embark on the quest of finding love. When you are vulnerable, your heart rages with emotions that otherwise succumb to the slumber. Caught in the whirlpool on uncertainty, the protagonists argue the toss and start paving the way to becoming one. However, soon destiny pulls them out from the façade of the utopian world; their religious disparity becomes the bane of their lives.

Written in a monotone and having superfluous descriptions, the narrative of this story is not impressive. At times, it becomes tedious to read the elaborate paragraphs. Flat conversations are a turn-off. However, the twists in the story salvage its reputation and expose the readers to some of the dark truths that are not spoken about so openly.
The cover of the book is apt and beautiful. Knowing that the book has been written by one of the most famous journalists, this story is relatable. There are parts of the story that offer moments of genuine empathy and apathy.

This story is another story of our next-door neighbour who married against the wishes of the society. This is the story of the constant battle between being accepted and accepting others. It talks about issues that need a solution.