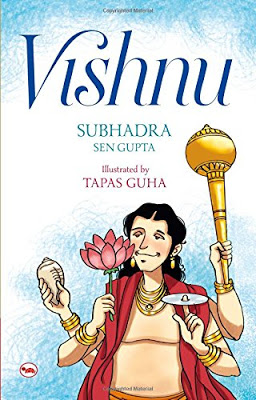 When we were kids, our parents and grandparents narrated several stories of strength, wit and values. One of the most prominent character during that time was Vishnu. Yes, Lord Vishnu was, and still is, believed to be the wittiest, bravest and the most generous of all Gods. This book is a compilation of three of the most famous stories: how Lord Vishnu fought the asura Bhasmasura, how he prevented the Amrit from falling into the hands of the asuras and how he took three giant steps to help the Devas fight King Bali (asura).

Area A: Text
The text has been organized in simple sentences. Not only can the children understand the language but also enjoy the pictorial representation of the scenes. Each story is related to the other and hence, it will probe their curious mind to read carefully. The only flaw in the book is editing. Time and again grammatical errors can be spotted. Since this is a children’s book, careful editing is a mandate.

Area B: Illustrations
The cover of the book neatly presents the main agenda of the plot. A warm and pleasant picture of Lord Vishnu and the sombre colours greet the eye with utmost pleasure. Kudos to Tapas Guha for making the book very interactive through the pictures.

Area C: Characterization
The main character of the story is Lord Vishnu and the most dominant trait that can be identified is his wit and generosity. The author of the book has brought in the positivity of the character, which will, in turn, help in shaping up the minds of the young readers.

Overall, an interesting book for the children!