Why I am a Hindu
Author: Shashi Tharoor
Publisher: Aleph Book Company
Rating: 4/5 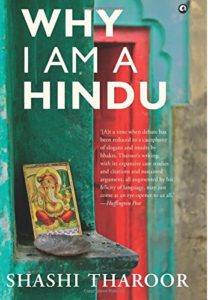 Developed from the Vedic religion, Hinduism is a religion that the people of South Asia follow. The people following Hinduism are called ‘Hindu’. They are expected to follow the theological beliefs that are not obligatory to any religion. None of the religions preach the ideas of idol worship, caste discrimination or karma being fatalistic. No religion has compulsory gospels. Some practices become deep-rooted in the culture and not in the religion. ‘Why I am a Hindu’ by Shashi Tharoor is an acute epiphany that breaks the myths related to Hindus and Hinduism.

Divided into two parts, the book describes the purpose and existence of Hinduism and how it is being misused in politics. This religion was not born in the country; it was gifted to us by the invaders who wanted to address the people beyond River Indus as ‘Hindus’. However, owing to the bitter circumstances, Indus became a part of Islamic Pakistan and the real roots of Hinduism were uprooted, for the people started carving dogmas that were not inscribed in any of the sacred texts. With time, lore and traditions were imbibed in the religion.

Tharoor, in a very simple and plausible way, explains the different aspects of Hinduism. He begins with the right definition of ‘Hinduism’ that emphasizes on finding one’s own truth as the motto of this religion. This religion never predicated on the idea that boundless wisdom and sanctity can be confined to a single sacred book. Unlike what the people believe now, Hinduism considers a ‘Nastik’ also to be a Hindu. It does not choose its followers based on their beliefs and notions.

With his characteristic choral prose and sterling vocabulary, Tharoor makes an audacious attempt to voice out the infinite illustrations of hallowed and secular Hinduism. With the onset of virulent politics, the polymorphic Hinduism has lost its essence and has been reduced to a mere means of advocating hatred and prejudice. In the second part of this book, Tharoor demonstrates his prowess in drawing the line between politics and religion. He explains how religion is being used as a muse in the fight for power. He is ruthless with his words as he slays the beliefs associated with untouchable and unclean Hindus. He also questions the existence of spiritual gurus, better known as ‘babas’, who claim to be the messengers of God. Exposing the readers to a grimmer side of Hindutva, he explains how the political agenda of the political thinkers is paving the path for a nation that has Hindus in the majority.

Written with absolute grit and candour, ‘Why I am a Hindu’ raises a lot of rhetorical questions the answers to which are same. In the name of religion, we are all following the blind alleyway. With apropos vocabulary and smooth flow of the ideas, this book is a must read for every apolitical person who is baffled with the concept of religion and the people.